Lately, I came across “Lostafeln”, “lot tables” (with “lot” as in “fate”), something like a horoscope. Look at these pictures, drawn from two early fifteenth-century books. 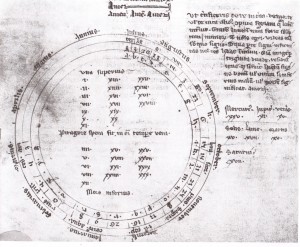 Is it just me or could they have been the role models for the notorious f57v…?

I’m particularly intrigued by the concentric rings with the “start” markers, and the alphabetic letter sequences.

Professor George C Hall has aubmitted his ideas about the VM:

Many of the “jars” or “tubes” illustrated are actually a form of Prayer Wheel, or “viewer”, operating on the same principles as the 1834 invention commonly known as the “Zoetrope”.

I have studied the Zoetrope, created experimental versions, and manufactured them for twenty years. Some colleagues and I even produced one for the Dali Lama, after my studies of the Tibetan Prayer Wheel, and how sequential images can be used to distract the conscious mind, so a message can reach the sub-conscious.

The conventional Zoetrope is uses strips of images wrapped around the inside of a slotted drum, much like the Prayer Wheel or a horizontal movie film. My latest version, however, is concerned with the circular floors, or Mandalas, that create a 3-D effect, based on the Roget Palisade Illusion.

The Voynich “rosettes” are actually Mandalas that are intended to be spun in a viewer similar to mine. In that way, they come to life, and the messages they contain can be received in a meditative state.

Personal assessment: Well… either we assume that the VM is a late-19th century hoax, or the middle ages already knew about zoetropes.

But the real question is: Can you make the rosettes actually behave like a mandala? If not, it’s really only a quaint, but hard to substantiate idea…

Word has reached us from Diane O’Donovan, VM researcher extraordinare hailing from the southern half of the globe, IIUC. Although she lately asked me to remove all her comments from this blog, she nonetheless sent me a summary of her current views (hypotheses? theories?) about the VM.

The Voynich manuscript is a collection of extracts drawn from a range of sources, some but not all of which were textual.

I date the origins of the imagery (relation between which and the current written text has not been determined) as between 4thC BC for the earliest source and not later in my opinion than the 3dC AD for the last.

Overlaid on the basically early Hellenistic imagery are copious indications that it was not maintained in the Mediterranean, but in regions east of Suez, and probably in the southern Yemen, southern India and/or as far as the Spice islands for most of the following centuries. The earlier part of the ‘pharma’ section belongs in my opinion to the Roman era, while the more ornate vessels I should date to somewhat later: Song dynasty to use the appropriate description.

In the century between the mid-12th and mid-13th, this matter returned to the Mediterranean world. Stylistic similarities to works produced in northern Syria, and others made near Aleppo for Europeans show closely similar forms, and so I believe it was that route through which most of the matter travelled to the west.
Included in the manuscript is a world-map (fol. 86v) which I think may be our only remaining example of a type of maritime map which is referred to by the earliest Islamic geographers as being already in use in the eastern seas in the ninth century and which Piri Re’is later refers to as jafariye. He used a number of them to create his own maps, and they are plainly not meant for ones by Claudius Ptolemy, but (as he says) made in the days of Alexander.

Most of the plants in the botanical section occur no-where but hte eastern world, although the images are so designed that they create equations between plants in the Theophrastan corpus, another work of the early Hellenistic period, before Krateuas introduced the ‘modern’ style of botanical imagery in the 1stC AD.

The Julia Anicia codex is thought to contain material directly gained form Krateuas, but similar imagery occurs in another manuscript produced somewhere around the Adriatic in the early fifteenth century, 150 years before the Julia Anicia was was known in Europe, so resemblances between the Voynich and that manuscript are mutual allusions to works produced in the period I’ve indicated i.e. 4thC BC – 3rC AD.

The text may have been first created when the Voynich manuscript was made, in which case it can be expected to represent a language or dialect used in Europe early in the fifteenth century, though by whom – and whether it is now extinct is a matter for the linguists and others.

The form of the script and some of its peculiar glyphs relates it to a series of scripts evolved from Aramaic in which an ornate ‘P’ shape normally represents a sound from s – t. If the text is enciphered, of course, it may not do so here.

Considered together, the parts of the manuscript clearly suggest collation to a purpose, and given the non-Mediterranean content of the botanical and pharma sections, together with numerous indications that the map on f.86v served the maritime world – and the map’s range, I expect that the sources had been a possession of persons engaged in long-distance trade, and from generation to generation. What religion or language they may have spoken n the early centuries AD cannot be assumed constant through the centuries, and pressures within both Islam and Christendom meant certainly that by the fifteenth century, any person in Europe would have to belong to one of the Abrahamic religions: as Jew, Christian or Muslim.

Although my research has been done without previous reference to other opinions, I find at the end that Baresch’s account of the manuscript, for all its hypothetical form of grammar, probably represents accurately the way the various sections first came together. Wiart and Mazar preceded me in recognising the plants as eastern ones, as I recently discovered.

The manuscript’s codicology suggests that the work was not produced in germany, where parchment is perfectly equalised from the thirteenth century, as the Voynich parchment is not. Further, the signs that the gatherings have been several times pulled apart and re-stitched seems to me most reasonably explained as a period of use within the pecia system, a system which survived in the southern part of Europe until 1450, but which had ended a good deal earlier in Germany.

This would further add to those who hold the opinion that the absence from the written text of diacritics (among other oddities) is a result of using some severely abbreviated note-taking style (with or without encryption). I would emphasise too that the written text lacks periods, and the pages show none of the signs normally seen in Latin-tradition books of ruling or marking-up preparatory to writing. I accept the view of people who have seen the manuscript – I rely on scans – that the manuscript shows no signs at all of periods or any preliminary marking-up.

I am happy to correspond with anyone who would like more details, information about one or another section’s imagery and antecedents, or bibiographical references relevant to some specific point.

I’d have a number of things to say about that, though at the moment I only have time for a Thank You, Diane, that you finally summarized your ideas which were difficult to follow over the previous years.

Diane used to be reachable at voynichimagery.wordpress.com, but this blog seems to be locked right now.

Latest reflections from others