It is a bad habit to discard parts of the VM which don’t fit with your theories or ideas as “deceptions” by the author, intended to distract wannabe codebreakers and to throw us off track.

While it actually might be the case, resorting to this stunt is technically simply an excuse for not explaining VM features.

Unless this tool is used with utmost self-restraint (some folks discard all illustrations in the VM because they don’t fit their “translations”), one will start to “explain” away each and everything, and can then arrive at any preconceived or desired conclusion.

Aside of the notorious sunflower, there are precious few plants from the VM’s herbal section which have been identified with any degree of certainty.

Here’s one from the German edition of the Wikipedia: 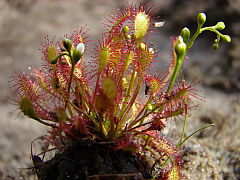 When browsing the VM, I noticed that f53r also bears a certain resemblance:

But what do I know about plantography…?

An experiment in terror.

Every now and then, a decipherment of the VM will be attempted which is based on the disctinction of very small differences between the individual characters. (One notorious example consists of the various accents found over the “ch” letter pairs.) These distinctions expand the VM character set and hence the degrees of freedom in translation attempts.

But where is the reasonable limit for this? How much must be attributed to variations in handwriting, and how much is actually an intended distinction? Follow me to the vaults, and study a little experiment in terror…

END_OF_DOCUMENT_TOKEN_TO_BE_REPLACED

I’ll admit, I keep using the term word for groups of VM characters out of negligence and laziness. Of course, in all probability VM “words” are not the equivalent to plaintext words. 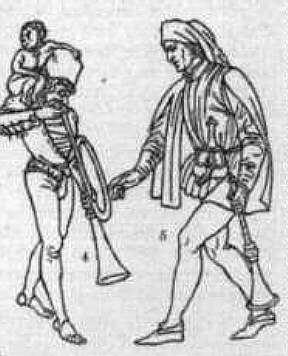 Note the headdo with the “scarf” protruding, the shape of the sleeves, the length of the frock, and the tight legs.

For a detailled discussion of the crossbow itself, see Jens Sensfelder’s analysis!

Edit: Okay, I’ve found the source, it’s the “Basel Danse Macabre” (Basler Totentanz), second row from the bottom, the leftmost “pair”. Unfortunately, the Wikipedia explains that the Danse Macabre was thoroughly “renovated” several times and adapted to the contemporary fashion each time, before it was essentially demolished in the early nineteenth century. All Hottenroth probably had access to was a copy from the time just before the demolition (which seems to be the picture in the WP), so its value as a source appears questionable. Dang it.

(Not to mention that it’s not a “poor man” but rather a musician.)

The great tragedy of Science — the slaying of a beautiful hypothesis by an ugly fact. (Thoms Henry Huxley)

Are these two babes wearing the same headdo?

The Virgin Mary seems to stem from around 1450, fitting the period assumed for the VM nicely. (Note the ointment jar in her hands, which resembles the VM “jars” as well.)

There is no shortage of alleged translations of the VM, though they are hardly ever compelling for anybody but the inventor. In February 2005, I posted a pattern to the VM mailing list, which I found was common with those (usually short-lived) attempts. Here’s a slightly edited description of the apparent process.

END_OF_DOCUMENT_TOKEN_TO_BE_REPLACED

I think this is jumping to conclusions. After all, there’s only so and so many different characters one can compose from a limited set of pen strokes that I’d be surprised if someone who wanted to purposedly*) invent an alphabet wouldn’t come up with shapes like “I”, “O” or “X” (even if they meant different sounds), because they can conveniently and quickly be drawn and are readily recognizable.

Even in period, the shorthand symbol “4” (resembling EVA “q”) was also used to denote the number “4”; apparently both meanings were independently developed.

Information content (as calculated from the entropy or “repetitivity” of the VM) is about two plaintext letters per ciphertext word (which consists on average of roughly 5 letters, depending on your transcription choice). This means that the encipherment process has “bloated” the plaintext.

Shorthand does exactly the opposite thing: Repeated string sequences are replaced with a single token, hence shorthand should tend to increase the information content and “compress” the ciphertext.

The fact that some VM letters resemble common shorthand symbols doesn’t mean that these letters were used as shorthand.

This “speakability” is amazing because we can be pretty much sure*), that the VM is not enciphered with a simple substitution cipher (where one would, eg, replace all occurences of the letter “A” with “$”, and “B” with “@” and so on). Rather, some mechanism has been applied which transformed (substituted, transposed, fragmented, a combination or all of those…) the plaintext into the familiar VM words. (From the regularity of VM word structure, we can be sure*) that there were some kinds of “rules” or syntax applied in composing them.)

Which conclusions do we draw from this?

What kind of encipherment would do that?

(I know it’s not truly a case of onomatopoeia, but I liked the sound of that word.)

Latest reflections from others

Thoughts about the Voynich Manuscript
Create a free website or blog at WordPress.com.